In early September, a group of us slipped away from our jobs to the shores of the Chesapeake Bay for a post–Labor Day getaway and celebration. The Hyatt in Cambridge, Maryland, offers all the amenities, with a golf course, tennis courts, and banquet halls. 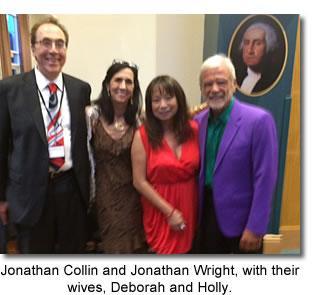 At that time of year, the weather is hot and sultry, and one can easily lose oneself sunbathing at the beach or pool. But we were greeted in the atrium by Abigail Adams and Martha Washington in Continental Congress attire and given T-shirts championing America's declaring independence from King George and a book about George Washington titled Blood of Tyrants while registering for the Sacred Fires of Liberty event. At 5 p.m. we gathered in tuxedoes and formal gowns, greeting fellow attendees; and as dinner commenced, we began to listen to politically based journalists and radio-show hosts, including Jim Engle of Fox News, espound on the dangers facing our nation and the need to defend our freedom and liberty.  My wife, Deborah, and I were sitting at a table with Dr. Jonathan Wright and his wife, Holly, and we listened patiently to the talk of the Revolutionary War heroes – a few speakers bedecked in 18th-century military garb – knowing that at some point we would be presented with an award for "Excellence in Integrative Medicine." Awards were to be given not just in medicine, but medical research, nutrition, and journalism, as well as special honors for defending liberty – the Sacred Fires of Liberty awards. A committee from Emord & Associates, a legal group in Washington, DC, bestowed the awards as part of celebrating the firm's 20th anniversary.

I first met attorney Jonathan Emord in the early 1990s. It was at an ACAM meeting and physician members were abuzz with the outrageous behavior of the FDA, which had organized local county police to raid Dr. Wright's clinic. The FDA had been sorting through the garbage receptacles behind the clinic. Agents had found empty Vitamin B injection vials, implying that Dr. Wright had been injecting patients with vitamins. Following the raid, Wright's office needed to shut down, and the alternative and naturopathic community were aghast. There was no narcotic drug diversion, no Medicare fraud, and no gross medical malpractice – just B vitamins. At the spring 1992 ACAM meeting, Emord proposed swift legal action to respond to the FDA. He played an important role in supporting Wright and fighting the unjust accusations by the FDA – Dr. Wright's office reopened with no legal repercussions. In 1999, Emord's successful First Amendment suit against the FDA in Pearson v. Shahala overturned the agency's prohibition against making nutritional claims about the activity of folic acid. Emord has prevailed against the FDA more than eight times in federal court – this would be a legal record. In celebration of 20 years of defending the freedom to practice medicine and having free speech regarding making nutritional claims, Emord's firm held this gala event. Nearly 150 individuals received awards for excellence in integrative medicine, journalism, and scientific research. Besides Dr. Wright and me, other colleagues receiving the award for excellence in integrative medicine were Drs. Julian Whittaker, Robban Sica, and Joe Mercola. Drs. Alan Gaby, Jeanne Drisko, and Jeffrey Bland also were conferred the award but were not in attendance.

As the evening rolled on and the speeches became ever more politically and historically enthralling, I noticed Dr. Wright roll his eyes several times – we were not to be given our award that evening. The award celebration did extend for a second night, albeit without the formal attire, and we eventually had our 15 minutes of glory, although it turned out to be the emcee's introducing us with a 3-minute bio and our walking onto the stage. Dr. Wright and I were hoping to be able to deliver an award speech at the ceremony. Unfortunately due to the limited time, we were not able to talk. I would like to share my thoughts having being awarded "Excellence in Integrative Medicine" and "Excellence in Medical Journalism."

My patients frequently ask me why I chose to practice integrative and alternative medicine when I could have practiced surgery or conventional medicine. In fact, I was set to complete a medical residency, but I opted to investigate and learn about alternative and "unconventional" medicine with medical maverick Leo Bolles, MD, in Washington State. Bolles was trained in internal medicine, but he shifted away from a hospital-based practice and focused on administering nutritional medicine in 1970. His practice emphasized treating patients with naturopathic modalities including nutrition, diet, exercise, mind-body work, and vitamin-mineral therapies. Bolles thought that while some patients needed drugs to treat acute conditions, they did not need them long term. He did not agree that the medical profession should have abandoned a therapy called chelation. Bolles concurred that ill patients need to detoxify their chemical and toxic burden, despite medicine's disinterest in detoxification. He agreed with the late Dr. Max Gerson's theory that a highly regulated diet in combination with supplementation of nutrients such as potassium, vitamin A, and iodine, as well as thyroid hormone, is remarkably important in enabling the cancer patient to survive. When I did my medical work with Bolles, I discovered that many so-called unproven treatments were not only instrumental in turning around patients' health problems but also minimally invasive, nontoxic, easy to administer, less expensive, and friendly to the patient and family. Patients were empowered to use these treatments because they dramatically changed their illnesses without causing side effects and put them in control of their lives. When I went to Dr. Bolles, I said that I would look over his alternative therapies and if they didn't work, I would leave. But that didn't happen. I found that the more I worked with the patients using these methods, the better the patients responded and the more the patients encouraged family and friends to seek the same medical help.

At the same time I was introduced to another medical pioneer, a very insightful biochemistry professor, Dr. Jeffrey Bland. He was collaborating with Bolles at the same time that I came to work with him. Bland not only knew his biochemistry in and out, but he could also articulate how there were biochemical mechanisms behind using vitamins and herbs as medicine. Bland would later term the science behind alternative medicine as functional medicine predicated on physiology and biochemistry. In conventional medicine, doctors would do lab testing to determine if there were evidence of systemic disease. Bland conjectured that lab tests could be done to determine if the system was functioning optimally. Dysfunctional biochemistry would usually precede the development of disease. One of the earliest tests that Bland worked out was demonstrating that there are enzymes measurable in the blood that could determine if vitamins were deficient or malfunctioning. He found that vitamin B6, vitamin B1, and vitamin B12 were often impaired but conventional medical lab testing would fail to diagnose it. The development of functional laboratory testing provided important tools to diagnose patients and monitor their progress. So not only was I seeing patient improvement using integrative approaches but I could also monitor their nutritional status.

One area that intrigued me greatly was psychiatry, particularly the treatment of mood disorders. Psychiatrists were developing a growing list of pharmaceutical agents to treat depression, anxiety, bipolar disorder, and schizophrenia. However, Dr. Abram Hoffer did very early work that demonstrated that certain vitamins, such as niacin, could play an extremely important role in controlling brain neurotransmitters. Niacin frequently enabled people to function with less dependency on drug therapy. Hoffer and his colleagues called this treatment orthomolecular medicine. His work was championed by chemistry Nobel laureate Dr. Linus Pauling, who found that orthomolecular medicine, especially the use of vitamin C, was critical not just in mental health but in battling cancer. My work with psychiatric patients at the Seattle Well Mind Clinic provided me with ample evidence that psychiatry was missing the boat by not employing orthomolecular vitamin treatment.

My work would not have been accomplished without the longstanding support of Deborah, who has stood by me in advocating and backing my medical practice. There are too many others who have played a vital role in supporting me to name here. Let me conclude by thanking two grandmothers in my life: my father's mother, Kate, who thought that the key to health was through eating well organically, and my wife's mother, Anne, who introduced me to the power of connecting to health through meditation, drumming, talking, eating, and playing.